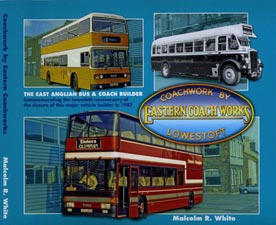 Over 30,000 bus, coach, van and lorry bodies were constructed at the Lowestoft factory of Eastern Coach Works between 1921 and 1987 whilst it was under the ownership of United Automobile Services, Eastern Counties Omnibus Company, Eastern Coach Works and finally Leyland Bus. The fine products built at the factory could be found at work almost everywhere in the United Kingdom and many export orders were completed there for countries such as the USA, Greece, Hong Kong and South Africa.

The twentieth anniversary of the closure of the factory was in 2007 and Coachwork by Eastern Coach Works includes aspects of the ECW history not previously covered and the opportunity has been taken to include hundreds of previously unpublished photographs taken at the factory of vehicles, buildings and many of the workforce. A large number of images of ECW bodied vehicles at work across the UK and some in preservation have been included.

This book has been published as a tribute to the thousands of highly skilled and dedicated folk who worked at the factory from its earliest days until the run down and total closure by Leyland in January 1987 and is designed to be of interest to those who worked there, had relations that worked there, transport enthusiasts and local historians. Today no trace remains of this very important manufacturing plant.

Coachwork by Eastern Coach Works can be ordered direct from Coastal Publications and is available from any good bookshop.

An Olympian undergoing a stability test.

One of a number of Olympian coaches completed in 1986 for Gray Line Tours of San Francisco, USA.