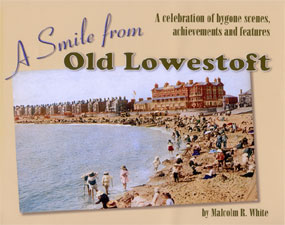 A Smile From Old Lowestoft

A celebration of bygone scenes, achievements and features

In the past, bustling Lowestoft had a strong economy created by a diverse range of major industries comprising the large shipbuilding yards of Richards, Chambers and Brookes, the Eastern Coach Works, a number of canneries and food processors including the vast Cooperative Wholesale Society and Mortons, a large railway industry, many marine engineering firms, a flourishing holiday industry with tens of thousands of folk spending their annual break in the town, one of the largest fishing fleets in Europe, and many smaller but vital businesses. The town was widely known for its special individual character and charm, good entertainment facilities, a fine shopping centre, and friendly and caring "locals".

Today in the 21st century, after most of the major industries have closed down but tens of millions of pounds from the European Union, Heritage Lottery Fund and other sources has been spent on Lowestoft, we are told it is a prosperous, vibrant town with very low unemployment and a real "hit" with tourists.

A Smile from Old Lowestoft, reflects upon those halcyon days before the many aid packages and grants had been received by the authorities to enable them to carry out the many "regeneration" projects we are now seeing and captures the mood of the town before the many recent permanent changes to Lowestoft were made. Some of these changes to the town are now familiar with local folk and visitors, an example being the "Eastern Sails" canopy installed in the historic High Street.

This book contains a very large selection of photographs, many in colour, demonstrating bygone aspects of Lowestoft life and includes examples of local major industries that have now passed into history, but which many folk may be familiar with.

A Smile From Old Lowestoft can be ordered direct from Coastal Publications and is available from any good bookshop.

Oulton Broad bridge and shops before the Great War.

Donkey rides are a bygone feature of Lowestoft Sea front.

A London steamer arrives at the Claremont Pier in 1911.