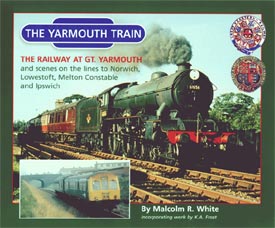 The Railway at Gt. Yarmouth and scenes on the lines to Norwich, Lowestoft, Melton Constable and Ipswich

Incorporating work by K. A. Frost

With an extensive quayside tramway, three main line and several smaller stations, Great Yarmouth had a very comprehensive and interesting railway network, the great majority of which no longer exists.

This book, published after many requests following the success of the The Lowestoft Train, is the first ever comprehensive work to review the railway heritage of this important location and covers in detail Yarmouth Beach, Yarmouth South Town and Yarmouth Vauxhall stations, some of the smaller stations within the locality, the unique tramway, and includes scenes on the five railway lines that once served the town from Ipswich, Lowestoft, Melton Constable and Norwich (2).

The history of the railways around Great Yarmouth from 1843 to the present day is included, much of which was written by the celebrated writer Mr. K. A. Frost.

Whilst the vast number of images to be found in The Yarmouth Train are predominately from the age of steam, to cater for the rapidly increasing interest in diesel traction and the modern network, many scenes of Yarmouth Vauxhall services intentionally feature diesel motive power. A selection of railway maps, timetables and tickets are included in the book.

The Yarmouth Train can be ordered direct from Coastal Publications and is available from any good bookshop.

Yarmouth Vauxhall with a Class 105 dmu.

Yarmouth Beach with a Class A Tank arriving with a Lowestoft train. 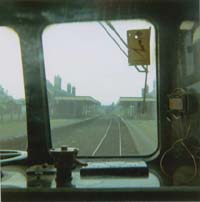 Gorleston-on-Sea from a Lowestoft bound train.